I wrote v8profile-to-pprof, which converts V8 CPU profiles to pprof. This lets you convert Javascript profiles captured by NodeJS or in Google Chrome and open them in pprof.

My favorite thing about pprof is that it is great for data analysis.

For interactive use, pprof’s viewer has some great features. It’s easiest to contrast with what Chrome’s DevTools provides. Here’s the “Chart” view of DevTools: 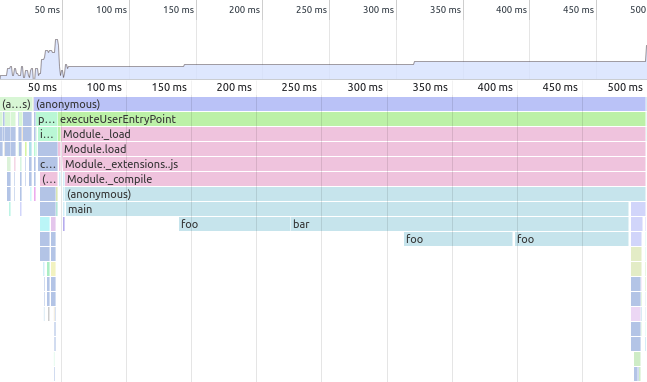 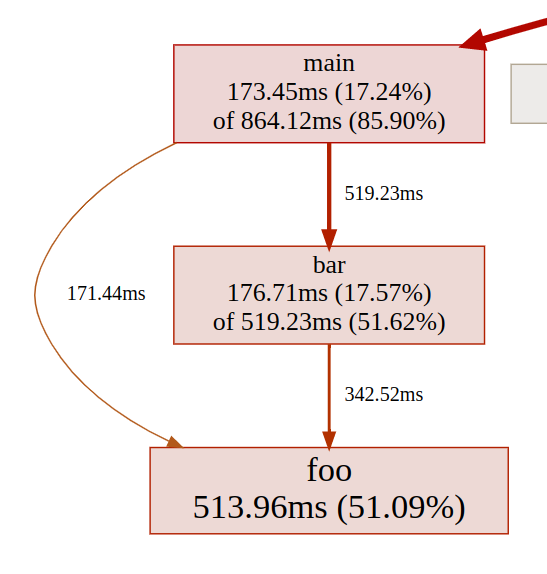 I found the call graph view harder to understand at first, but it’s great for long profiles with many functions. It’s especially useful if you have single function which is called from different places (for example, foo in the above sample). pprof’s view lets you easily see all the callers and callees, which is much harder in the timeline view.

pprof also provides other nice views, like flamegraphs and source-views. Strangely, one thing it does not provide is the timeline view, so having the original CPU profile around is also useful.

For more details on pprof, see their README.

I wrote this in Haskell. I am not super good at Haskell (yet), so caveat emptor.

I used aeson to parse the V8 CPU profile (since it’s just JSON under the hood). pprof takes in gzipped protobufs, so I used proto-lens to generate an encoder based on the profile.proto in pprof.

Since I was already using lenses for proto-lens, I opted to use lenses for my state too. I am not very happy with how the code turned out – it felt like lenses made it really easy to use state, and so I ended up with way too much state. For example, here’s what the main function looks like:

This looks pretty but it is IMO quite ugly. I really should have untangled the state dependencies here. In particular:

So I have ended up with spaghetti. With the benefit of hindsight, I would have made the dependencies explicit.

I probably would leave the addStringTable state implicit, because it would get unwieldy to pass around otherwise. But I really have no excuse for why PprofState is so large.

One other “low-light” of the code was that I ended up a little confused between Int64, Word64 and Int. proto-lens only uses Int64 and Word64, whereas a lot of my functions used Int. So I ended up with a lot of fromIntegral to convert the output for proto-lens, and I’m still not totally convinced it’s correct. It probably would have made more sense just to do everything with Int64/Word64 for consistency.

Anyway aside from the pretty poor state management I’m decently happy with how the code turned out.

This tells us that line 14 of the relevant function was much slower than the other two lines. For some reason, Chrome’s DevTools do not expose this information at all. Currently I just group everything by functions when I spit them out, but I want to support these line level ticks too so you can see them in pprof.

On a more mundane note, I’d also like better usability. Right now it doesn’t take any command line arguments (not even --help) nor does it gzip the resulting protobuf, so it’s a little unwieldy to actually do the conversion:

I think this’ll become more relevant, as I also want to support memory and allocation profiles too.

Finally, I want tests and a release system. It’s relatively small code right now, so I just test it manually. I did set up a nightly build, but I haven’t gone through the legwork of writing snapshot tests and integrating with sourcehut’s repository artifacts for releases. I also want to figure out how to compile for other machines besides x86-64 Linux.